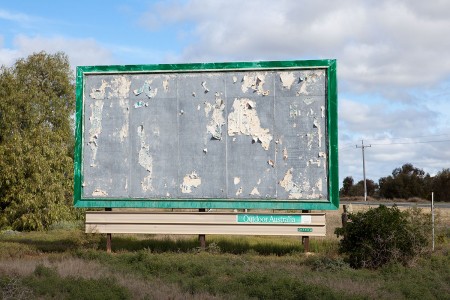 My creative body of work makes allusion to a kind of quiet, slow human catastrophe, where our way of life is in a state of crisis. My images are devoid of people, yet imprinted everywhere with human presence. They depict places that are, to my eyes, everywhere in regional Australia. There is an undertone that our human condition is comfortably sedated, lost in an effortless world of melancholic bliss. It is in this milieu that we seek spurts of temporary happiness through consumerism, where each new acquisition is packaged with a formulaic promise of contentment, and sealed with all but invariably false sentiments such as “have a nice day”.i This is a world shaped by a sense of loss, of not having enough; a world ultimately ruled by fear.   read more…

“Jamie Holcombe’s photographs in Civic Malaise reveal a landscape that is deserted and desolate. The people who built these structures and strung fences around to protect them from marauders or vandals have vanished. The tarmac may still be freshly laid in Coffin Bay; the solar panels, just installed, may still be gleaming in East Meets West; and the wire fences may still march crisply across the barren earth of Wave Rock. But elsewhere the paint is peeling in Outdoor Australia, and the gravestones are crumbling in South Bowenfels Cemetery. Stephen Payne June 2015″  read more…

A photographic exhibition of urban landscapes in regional Australia 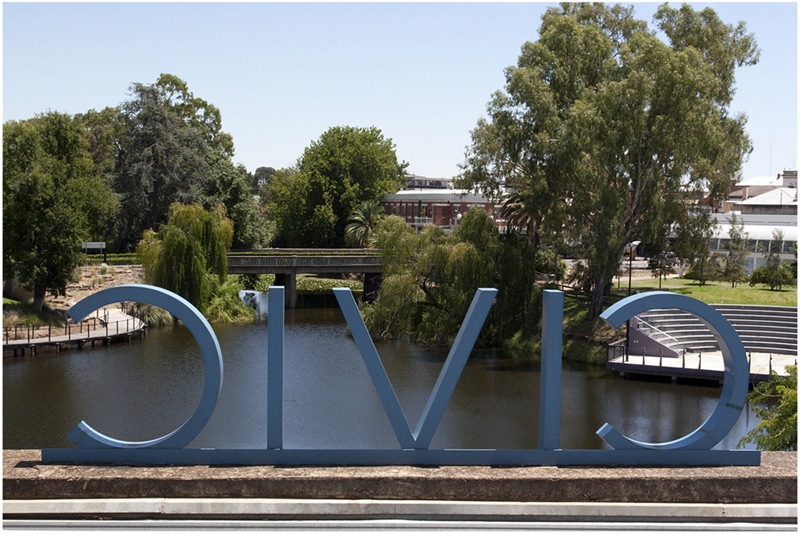 Anarchy Bureau is an album of original songs available on 12” LP record, CD, and digital download. In a doggedly single-handed endeavour, I wrote, performed, recorded and mixed all the tracks, as well as doing the cover photography and design. According to one critic, the result is “raw and clumsy, alive and well”.

It is an eclectic mix of songs, but there are a few unifying threads running through the album. Musically there is an obvious blues undertone to some of the songs, and lyrically most are connected through social commentary and critique, although a couple are more personal and introspective.

Three songs on the album were shortlisted for the Australian Songwriters Association 2014 National Songwriting Awards.

The idea of entering “Exhumed” seemed perfect because some of the issues on which the band comments have been long buried and denied in our everyday lives, but alas, being a band of only one, “we” were ineligible.

The Ovation Breadwinner, and its siblings the Deacon and Limited, were Ovation’s first foray into building solid body electric guitars in the 1970s. I am writing a detailed overview of these amazing vintage instruments, which will eventually be posted here.
(Pic shows my highly modified 1975 Breadwinner).

This page is currently under reconstruction.
Please come back later.